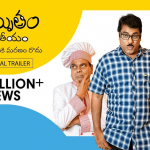 This is a multi-starrer web series Amrutham Dhvitheeyam which has been directed by Sandeep Gunnam and is made available to the viewers now in the ZEE5 platform. This is one of the most popular Telugu web series since it came on the platform in the early 2000s. Watch ZEE5 Original Series. It has been known widely due to its great content. One gets nostalgic when they see the … END_OF_DOCUMENT_TOKEN_TO_BE_REPLACED