You are here: Home / Archives for Lalbazaar 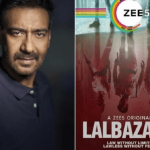 Aren't you waiting for a new series one after the other? I guess it has become a daily routine in this Lockdown phase. Here's what ZEE5 has brought to you a classic crime drama web series Lalbazaar which is super edgy, it has suspense, murder mystery, lust, revenge, politics, investigations and so much more. Lalbazaar: One of the Best Thriller Series on ZEE5 I think it is … END_OF_DOCUMENT_TOKEN_TO_BE_REPLACED